Slowly but surely, I’ve added to my knowledge and understanding of how the practice of medicine — and the cultural norms around it — are affecting the humans involved. This isn’t just about the patients but about their families, the doctors and nurses and therapists and receptionists, all the people who form the ladder from illness to healing. I’m grateful that there are so many good stories available and also so much strong, fascinating writing of a more clinical nature. I’ve written about the book-length writing I’ve read in a series of posts I’ve called “What I’m Learning.” I wrote first about Gavin Francis and Jill Bolte Taylor, then about Seth Mnookin and Henry Jay Przybylo, then about Susannah Cahalan, and, last week, about Atul Gawande and Heather Armstrong. The authors range from doctors to patients to researchers. What I was missing in all these stories was a character I could look at, hold up my own hand, and watch her raise hers in the mirror.

I was looking, fruitlessly, for a medical story told by a parent. And this fall, I finally found one.

Happiness: The Crooked Little Road to Semi-Ever After 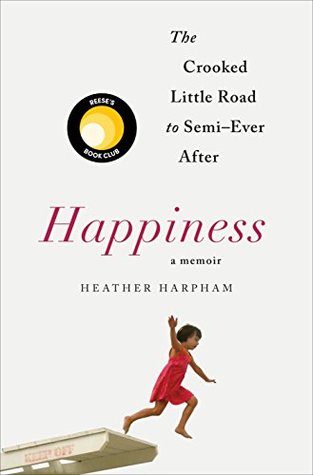 Reading Heather Harpham’s book literally kept me awake until 3:30am. In this beautiful story I simply could not put down, not for a second, she winds us through her path through parenthood, including the fraught relationship she had with her daughter’s father. Though the relationship endures and, eventually, becomes stronger for the journey, the parts of this story that held my attention were not the wrestling with romance. It was the story of her daughter’s rare blood disorder and the path to healing her that had me reading by the dim shine of my book light as my husband slept next to me.

Like me, Harpham was thrust early into the life of surprise caregiving for a child with a perplexing illness. Waiting at her daughter’s side in the NICU, as I had with my own daughter, she was overwhelmed in similar ways. On page 36, she writes:

“At 6:30 every morning in the NICU, our team, the Red Team, rounded through…I wanted to ask them to slow down, repeat, wait, how do you spell that? But their talk was like Philip Glass music, filled with repetitive, incomprehensible sounds, unstoppable and forward marching. Even when I asked, they seemed not to hear.”

Harpham captures so perfectly the whirlwind initiation into complex medical needs. Above my head in our bed is a sea of post it notes my children left as an April Fools joke several years ago, and during the night I spent reading Harpham’s book, I carefully pulled down squares to tear and leave in sections of the text I wanted to write down later. Though her daughter and mine struggled with vastly different medical issues, the feelings of fear, of blind trust, of confusion and heartache are identical. I felt her calm in the face of in-the-moment drama and her exhausted release afterward. I felt her and her daughter normalizing what should never be normal and nodded in the dark of my bedroom. Copied into my research for my own book are more than a dozen excerpts from this one, like these:

“She was chubby, currently pink, and humming a wordless, happy opera. She was a baby from central casting.

“Gracie never asked us What am I doing here? Or Why would you do this to me? She was not philosophical about her suffering. She didn’t want to know Why me? She only wanted to know how long it would last.” (page 209)

“Though there were many people around us, Gracie and I had done this – get well – together…in some fundamental way, pulling her through illness had felt like a two-person dance, or I’d made it one.” (page 262)

That last one struck me with a feeling of deep guilt. My own husband, like Harpham’s, was committed to doing absolutely anything my daughter or I needed. He and I weathered the years of our daughter’s illness in lock-step, I thought, never feeling more disconnected than practicality demanded, but it was true that I felt more responsible for her than I’d ever have assumed he felt. Bound and determined to make my daughter’s life as normal as possible, I dug deep within and had no emotional space for real collaboration. I turned the journey into a “two-person dance” between my daughter and I. Had any distance between my husband and I come from my dogged determination to put my head down and bear into the wind alone?

The best stories make us reconsider our own lives in some way. Harpham’s fits the bill perfectly. In all my reading, I’ve found very few accounts by caregivers of young children with complex medical needs. I’m beyond grateful to have found this one.

Have you read any books that you think I should read? Please share them with me in the comments!