Our family, unlike the majority of Americans, has spectacularly good health insurance. It’s provided by an employer, and because of my husband’s combination of high-demand skills, excellent work ethic, and good luck, we’ve had the same coverage for more than a decade. Here’s how it works:

Every two weeks, my husband’s employer deducts $196 from his paycheck for our medical insurance.

Despite that, beginning on January 1 each year, we pay for 100% of the cost of every doctor’s visit, every prescription, every blood test, and every other medical cost until we have spent either $1,500 per person or $3,000 total for our family of four. That means that, until we have reached into our own pockets and paid $3,000, our insurance has not even begun to kick in.

As a family, once we have spent $7,000 on medical costs, our insurance begins to cover 100% of whatever medical expenses come next. Let’s review, then, the cost of medical care for our family in a year when someone gets really sick:

Now, for comparison, let’s talk about the cost of having an iPhone. United States Congressman Jason Chaffetz commented last week regarding health insurance for people with low incomes, “maybe rather than getting that new iPhone that they just love and they want to go spend hundreds of dollars on that, maybe they should invest it in their own health care. They’ve got to make those decisions for themselves.” The implication that these are decisions that relate to each other — that a person might weigh the relative benefits of a new iPhone versus the purchase of health insurance — is worth framing in practical terms. For a family with children who need the kind of health care my daughter did between the ages of birth and nine years old, this decision isn’t one that is undertaken lightly.

I did some research based on my own phone carrier, which is AT&T. The following figures assume that: 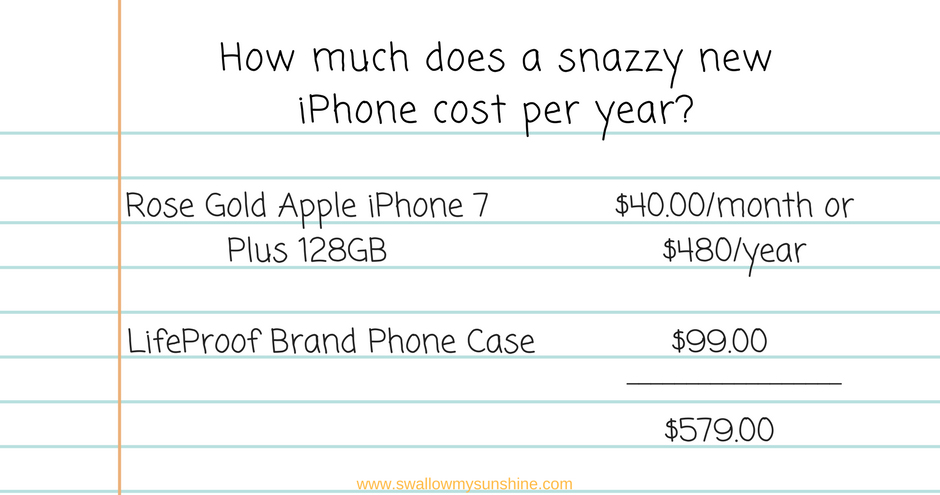 In our family’s case, with spectacular insurance coverage, we would have the following choice, according to Chaffetz’s proposition: 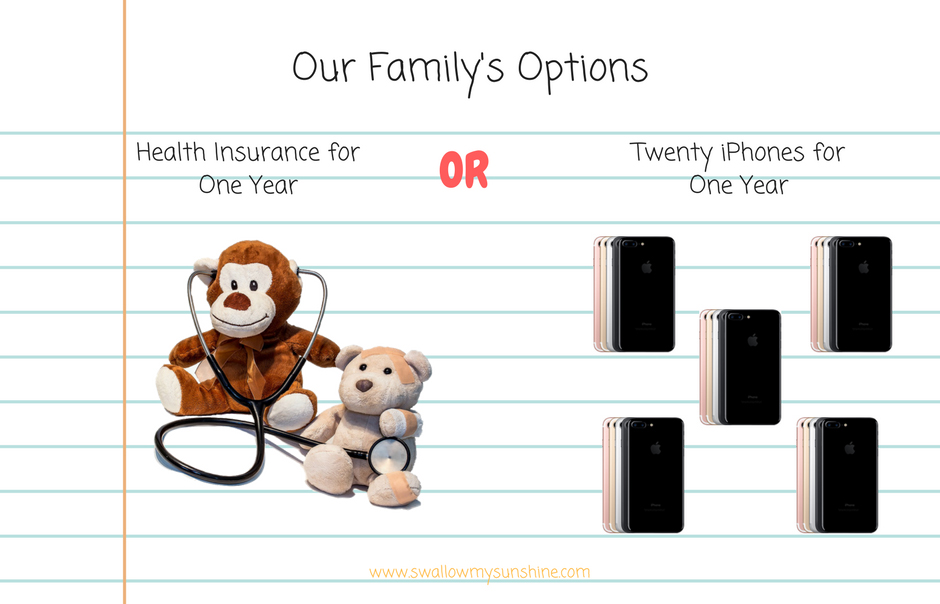 This illustration makes obvious the insensitivity, idiocy, and ignorance of Congressman Chaffetz’s false equivalence. However, I’d like to try one more illustration. I’ve said over and over again that our family’s insurance is excellent. Partially, this is because employer-based health insurance allows for a greater pool of people to contribute to lowering costs — healthy young people balance out families like mine, with one medically complex child, an adult with asthma, and regular expenses for the rest of the family. Because of all that, I’ve seldom ever paid full price for a major medical procedure. I’ve never had to choose between food and treatment for my daughter. But what if we didn’t have insurance?

How many iPhones does an endoscopy cost?

My daughter had half a dozen endoscopies in 2011. Because of her age at the time, they were all done under general anesthesia. Here is the cost of one endoscopy without health insurance:

Six iPhones for one endoscopy. That’s thirty-six iPhones we could have bought for that year’s worth of endoscopies, had we not had insurance — and so, our insurance allowed us to save the cost of sixteen iPhones.

This is not a game of trading cards, Congressman Chaffetz. Even the wealthiest people I know don’t have thirty-six iPhones; even the most destitute people I know are not choosing between a smart phone and their children’s medical care. The costs of insurance and the health care it is supposed to cover are astronomical compared to the phone you’ve chosen as a symbol of unearned luxury.

Shame on anyone lazy enough to make that comparison. Shame on anyone unwilling to take the time required to uncover even this ridiculous, mendacious fake parity. Shame on our country for not only failing to solve the horrendous problem of health care injustice, but for choosing elected officials who only seem to make it worse.

I’d trade my iPhone for a Congressman good enough to stand up to this sham.

One thought on “The Phones Our Insurance Saved Us”