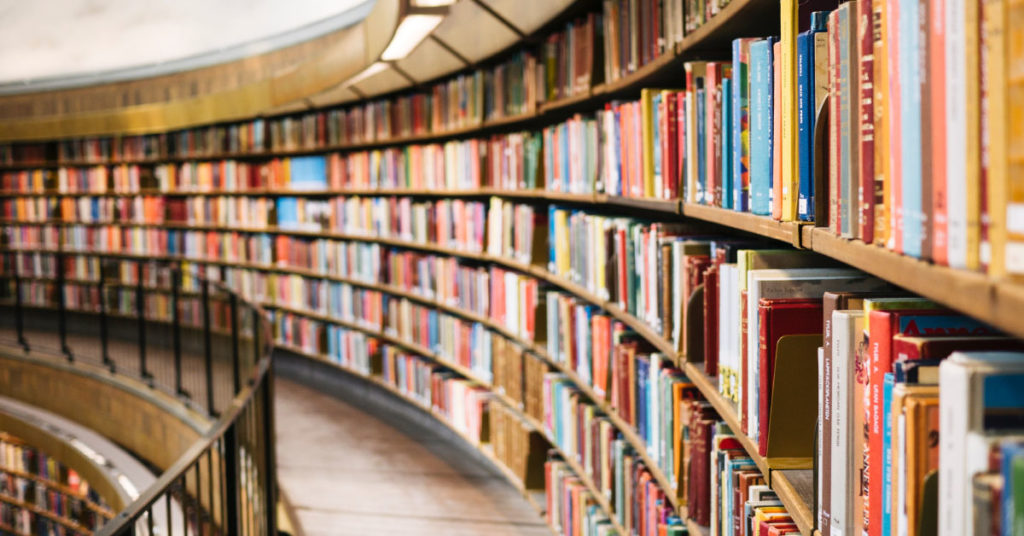 Someone asked on Twitter last week for their followers to share something good. It was as open and unspecific as that, and the first thing that came to mind for me was libraries.

I’ve always loved libraries, ever since I was old enough to bike the three-and-a-half miles to my public library in Mequon, Wisconsin. Situated next to the municipal swimming pool, it was a beautiful two story, circular room, with children’s books below and adults’ above. It made me feel calm and hopeful, as does my beloved main branch library here in Evanston, Illinois today. The thought that passes through my head as I step inside is always thank goodness. There are so many stories here.

In the end, the happiest I ever feel is when I am sucked deep into a book, fascinated and immersed. All avid readers feel this way, I think – we all talk about it with the same vocabulary of being surrounded, transported, brought inside. It’s such a gift to have both the reading aptitude and interest in books. I’m grateful for it in every season and in every environment.

This year, I spent a lot of time reading books about health and medicine as part of research for my book. You can read the previous posts: about Gavin Francis and Jill Bolte Taylor, Seth Mnookin and Henry Jay Przybylo, Susannah Cahalan, Atul Gawande and Heather Armstrong, and finally, most usefully, Heather Harpham. As I finished my book proposal, I had to find a few more that closely mirrored the structure or voice or topics of my memoir, and I’ll share some of the ones I liked best below.

END_OF_DOCUMENT_TOKEN_TO_BE_REPLACED

She was sitting on the couch facing me when I opened the door to the apartment. In a deep-cut v-neck t-shirt, beaded necklaces dipping into her cleavage, my roommate asked me why I’d put the ironic knick-knack I loved back on top of the stereo speaker.

“Because I think it’s funny,” I said.

“But you know I hate it,” she answered, her fingernails pressing into her thighs.

“I know,” I answered her, clutching my backpack, “but you do a lot of things that I hate, too, and you don’t seem to care. Why should I?”

“So you put it up there for revenge?!” she asked, still sitting. I watched a patch of red begin to creep up from between her breasts into the v of her shirt.

“You know,” she said, rubbing her hand along the knee of her jeans, “I sometimes come home at night when you’re sleeping, and I stand outside the door to your bedroom, and I have to force myself not to come in there and beat the shit out of you in your sleep.”

“You’re crazy,” I answered, staring at the french doors to my room, and then at her neck, which has grown crimson to match her chest. “That’s what a crazy person says.”

“I’m not crazy. I just hate you.” END_OF_DOCUMENT_TOKEN_TO_BE_REPLACED

Three and a half weeks ago, I was walking through my garage with my husband David, on our way to Parent-Teacher Conferences for our younger daughter. As always, I was chatting and walking and probably planning something in my head to do or say next. We need to pick up our box of farm vegetables after the conference, I might have said, and then also the pizza place is donating a portion of the proceeds tonight to that charity that buys school supplies for kids in need, so we should grab takeout from them, and then…

I felt it. The bolt on the garage floor, the one that’s been sticking out of the cement for at least 12 years since we bought this house, the one I’d tripped over a dozen times but always caught myself. This time, I didn’t. I flew forward, maybe aiming my body around the hood of the car or maybe just flailing, helplessly, in the space between the bolt and the spare marine battery — 50 pounds and unyielding — that suddenly caught the left side of my head before the rest of me landed.

The shock of pain was sharp, or the sharp pain was shocking, or both. I cried, immediately, with the injustice of the thing I’d hit, the heft of it, the weight, the way my head and also maybe my ear hurt, the way I was left lying on the garage floor on my stomach. I lay there crying as David tried to assess what had happened. The garage was dark. The floor was gritty. My head was exploding.

After a few minutes, I sat and then stood up. David  asked if I could see him, and I could. I knew his name and mine, the president (ugh), the date. David wanted to take me to the hospital. I insisted we needed to go to our daughter’s conferences. It hurts, I said, but I think I’m ok.

So, we went to conferences. I had a few quiet, secret moments of dizziness, but I made it up and down the stairs and through a series of conversations. When we stepped outside the school, though, the first wave of nausea hit. I pretended it was hunger and pressed on — to get the vegetables, to get the pizzas. When we stepped outside the pizza place, the nausea and dizziness were so intense I nearly dropped to my knees.

David took me to the hospital. END_OF_DOCUMENT_TOKEN_TO_BE_REPLACED

In the autumn of 2009, when I took this photo, I was the mother of a four year old and a seven year old, walking to school hand-in-hand on both sides. My swirling girls danced in the kitchen each afternoon, fell to their soft bottoms on the hardwood floor and laughed, got up and did it again. I side-eyed the one who had yet to finish her milk and the one who distracted her, but there was so much joy every afternoon in that kitchen that I know I also joined in the dance. I worried and I danced. I leapt and I fell. The leaves outside our windows fell and fell.

“The trees are all naked!” my littlest one said, in shock, one day in late October, and I wrote it down in my list of cute-things-they-said.

We were always together, we three. END_OF_DOCUMENT_TOKEN_TO_BE_REPLACED

This last week of summer vacation, my daughters are redecorating the basement.

They are thirteen and sixteen, past needing space for a vast collection of magnetic princesses and plastic animals, the dollhouse closed up and stored beneath the stairs. The collection of pony puzzles and foam building toys and inexplicable plastic parts from birthday-party-goody-bags have been sorted, donated, stored or thrown out. Elmo and Dora the Explorer are long gone. What remains is a small enough collection of things that the basement — home to all things daughter for a dozen years — is ready to become a teenager hangout. They are planning it themselves.

Like many projects, this was supposed to be an all-summer-long plan, but here we are in the last week of summer vacation, frantically painting. I brought paint sample pamphlets from Home Depot for them, blues and reds and greens and purples and yellows. They’re the same kinds of sample cards that their father used to give them to hold while he wheeled them through the store in the oversized carts when they were very tiny, on the one day each week when he’d bundle them quickly out of the house in the early morning so I could get a few precious extra hours of sleep. They still talk about playing with the doorknobs in the store. They still remember the carts.

This week, they finally chose a light blue for the walls of their hangout. My older daughter says “It’s going to be like looking at the sky!” END_OF_DOCUMENT_TOKEN_TO_BE_REPLACED