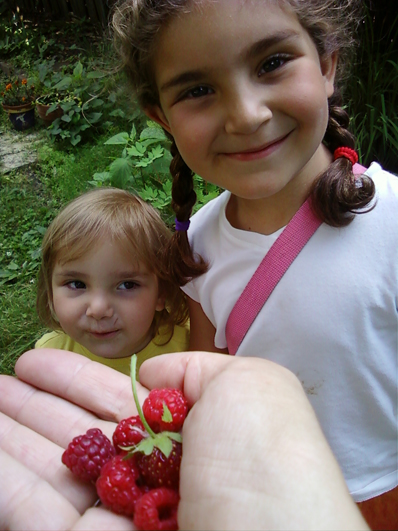 In the winter of 2006, when our youngest daughter Sammi was just over a year old, our neighbors invited us to their Christmas Eve party. We knew they’d always had a huge gathering of friends and family, and so that afternoon, we arranged to have a huge and elaborate fruit bouquet delivered. Later that evening, when our host greeted us, he said his young grandson had been staring longingly at it all day.

“Fruit is his favorite thing,” he said. “We wouldn’t let him have any until the party started. When the first people rang the bell, he raced for the fruit!”

I remember very clearly thinking that this little boy had been raised right. If fruit was his favorite food, then he had chosen it over sweets, chips, and other junk. I secretly had always admired people like that — people who really preferred healthier food. Those people would have an uncomplicated relationship with their favorite foods; those people would be lucky.

In a few short months, however, I would learn what it meant when a child preferred fruit over everything else, and sometimes to the exclusion of everything else. Sammi’s love affair with blueberries wasn’t exclusive — it was part of a larger issue with swallowing anything that wasn’t wet and cold, even though we didn’t know it until she was much older. From her early years of eating blueberries soaked in cream or drenched in warmed coconut oil, to the infuriating meals where we made her eat some calorie-dense dessert before she was allowed to have her beloved bowl of raspberries, to the months of restricted diets during which I would be grateful that she saw fruit as a delicious treat, I would spend the next years wishing I’d never had a jealous thought about that neighbor’s grandson and his love of fruit.

Practically, there were benefits to this pickiness. Had she preferred candy or pork rinds or something generally considered to be “junk,” we would have let her have it anyway, desperate as we always were to get calories in her body however we could. On her last day of preschool — which coincided with the first week of her intensive elimination diet for eosinophilic esophagitis — I took her to pick out some treats to share with her friends. The only candies available at that time that had no dairy, egg, soy, nuts, or wheat — and were not prepared on the same equipment as those things — were DumDums and Smarties. I let her get a bag of each.

“All that sugar isn’t good for a girl her age,” an old lady spat at us as we walked past her toward the register.

I didn’t say anything. Anything I could say would be too long and too ugly to say in front of Sammi.

But fruit! Well, fruit was never questioned. When she brought raspberries for her kindergarten class for snack — fifteen dollars worth of raspberries because that’s how much it costs to feed raspberries to twenty kids — I received nothing but praise. When her snacks at camp were bowls of strawberries and grapes I had to prepare at home because I didn’t know what would be on the cutting boards and colanders of other people, I was hailed as brilliant for convincing my child to like fruit. When she ran squealing to the farmer’s market stand every week to choose anything she wanted, people smiled with approval.

A cup of raspberries is 65 calories.

A cup of Cheezit crackers is 312 calories.

When you are trying to grow a child — to grow her brain, to grow her skinny legs and her sunken eyes and her ribs you can see and the top of her sweet head, which is a foot below the heads of her friends, the choice of raspberries seems less saintly.

Picky eaters are usually the ones at which that the world points a judgmental finger and whispers, how can that child’s mom let her eat only chicken nuggets and sliced apples every night? or I can’t believe he will only eat bagels and cream cheese for lunch — isn’t this the fourth year of that? Picky eaters are sometimes fat, sometimes skinny, sometimes indulged, sometimes not — but no one noticed my picky eater’s choices as picky because they were so universally held up as healthy. Meanwhile, she was anemic, underweight, failing to thrive, and, as it turns out, struggling to swallow.

We all love fruit in this house: berries, grapes, melon, stone fruits, apples, pears, all of it. But now, after years of my mother teasing me in my youth about not liking fruit and calling it “the F word,” and then years of my daughter’s childhood using fruit as a bribe to eat one more cookie, one more bite of pizza, one more slice of cheese, my relationship with fruit is complicated.

And who ever says that?

5 thoughts on “All the Fruit”